The heat is back, the swarms are back!

Today we want to talk to you about swarming: the natural process by which a colony of bees splits in two to form a new colony and, with it, a new swarm.  Swarming is the natural way in which a bee population reproduces and is a vital part of the life cycle of our little honey bee friends.

This phenomenon normally occurs in times of high temperatures, i.e. between the end of spring and the beginning of summer, and it is precisely the rise in temperature and imbalances in the thermoregulation of the original swarm that is one of the main triggers for swarming to begin. However, other determining factors such as flowering also play a role. The presence of a greater number of flowers in ecosystems means that bees collect more pollen and activity in the hive is frenetic. The collection of more pollen results in more nectar production and therefore a reduction in the available area of the swarm. The queen loses space to lay her eggs and the release of pheromones that control the colony hierarchy drops drastically. This, in turn, causes previously laid eggs to start being fed with royal jelly instead of honey to rear new queens. All these events are called “swarming fever” and trigger the departure of a group of scout bees from the swarm in search of a new location for the establishment of the new colony with the old queen bee. 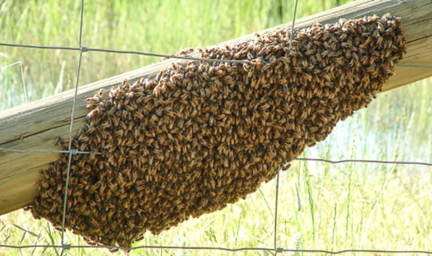 The new swarm may settle in a permanent location or, on the other hand as it can be see in the image above, temporarily settle in a location which they will leave again later. On the other hand, in the original swarm, the future queen bees continue to be fed by the nurse bees. When they emerge from the queen cells, if they are not aborted, they will fight each other to become the new queen bee.

Visually, swarming is a spectacular natural phenomenon as we can observe the scouts leaving in single file in search of their new home. At this time, the bees are thought to be virtually harmless, as they are so focused on their mission that they are unaware of the presence of potential dangers. However, extreme caution should be taken when in the vicinity: stay away, especially if you suspect that someone might be allergic, do not attack them and do not try to destroy the swarm.

Swarming not only serves to perpetuate the species and ensure the extremely important biological function of bees, but also facilitates the genetic diversity of these small but important pollinators and also serves as a mechanism for them to get rid of fungi and parasites during the flight.